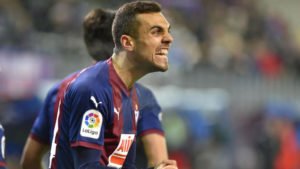 Specualtion continues that West Ham have made a £13m bid for Eibar defensive midfielder Joan Jordon.

Yesterday, Sky Sports reporter Kaveh Solhekol added it on the end to a tweet about Gomez in a tug of war between  West Ham and Valencia.

Sevilla are the strong favourites to have a contract agreement in place with Jordan and have already offered 10 million Euros.

Jordan has long been on Sevilla’s radar and the Spanish club are hoping to conclude the deal with Eibar this summer.

The midfielder is reported to have agreed on a verbal pre-contract with Sevilla on a four-year deal according to Spanish daily Mundo Deportivo.

Previously Claret and Hugh have been told that an additional defensive midfielder is not a priority this summer and than Pellegrini is happy with Declan Rice with Mark Noble and Carlos Sanchez as cover. I would be surprised if a formal bid of the full release clause has been submitted by West Ham. It isn’t our style and we are currently focussed on a striker.