FA give West Ham until the end of the week 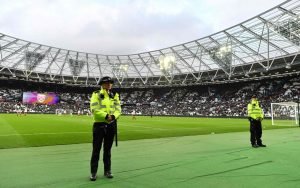 West Ham has been given until the end of this week to respond to the Football Association with their observations on the troubles that marred Saturday’s 3-0 home defeat to Burnley, Sky Sports News claim.

Four separate pitch invasions interrupted the game at the London Stadium, and co-owner David Sullivan was allegedly hit by a coin and was later forced to leave the directors’ box, as hundreds of supporters congregated below in protest at the club’s board. The FA expects this to be a lengthy disciplinary process.

It could still be a fortnight before any charge is forthcoming, and even longer before the FA announce any sanctions, once an independent commission has heard the case.

Yesterday the club’s senior management met with operators London Stadium 185 and stadium owners London Legacy Development Corporation as the post mortum started. Newham council have also called for an emergency Safety Advisory Board of all stakeholders including West Ham on Thursday at the stadium.

Aston Villa were fined £200,000 by the Football Association in 2015 following pitch invasions at the FA Cup quarter-final against West Bromwich Albion and insiders say West Ham should brace themselves for a six-figure fine.