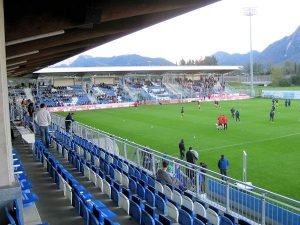 West Ham have confirmed that Friday’s match will be screened live for supporters in the UK and Republic of Ireland via the club’s official Facebook page at https://www.facebook.com/westhamunited

West Ham will meet Angers, who finished 14th in Ligue 1 last season, at the 4,128-capacity Das.Goldberg-Stadion in Grodig. The stadium is the home ground of SV Grodig, who play in the Regionalliga West, the regional third tier of football in Austria.

For those in Austria Tickets will be available on matchday from 4.30pm CEST at the Das.Goldberg-Stadion, priced at £13.50 for Adults and £9 for Over-65s and Under-21s.

An estimated 300 loyal West Ham fans supported the Hammers at the Betway cup in Austria earlier this week.

Felipe Anderson, Aaron Cresswell and Chicharito should all feature in the game after passing fitness tests.

Lukasz Fabianski is set to be given a second start in goal, having made his debut at Ipswich Town on Saturday.

6 comments on “Final Pre-season game to be streamed online”