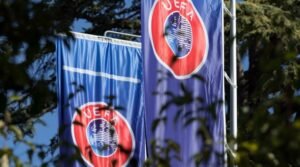 Fears are growing tonight that football will be closed down until September as the coronavirus global crisis deepens.

It will all depend upon the outcome of a UEFA meeting next Tuesday when not only is the cancellation of Euro 2020 to be discussed but a possible shutdown of the sport across the continent, as first reported by The Independent @ https://www.independent.co.uk/sport/football/premier-league/coronavirus-news-premier-league-champions-europa-cobra-meeting-a9401466.html.

There is a scary scenario afoot ahead of the meeting which could see the face of the British game change forever as revenue streams dry up for lower division clubs which could even force them to close down.

Such is the situation, that the game could be heading for meltdown should Uefa not make exactly the right decisions and with no experience of plotting a way forward in such unchartered waters as a global health scare that will become incredibly difficult.

According to the  report, UEFA has the power to impose sanctions across Europe, which the Premier League will have to follow, with the newspaper declaring: “Uefa are in a position to take the initiative and impose a uniform programme across the European leagues and Tuesday’s meeting will be crucial in mapping out the immediate future.”

The fate of the league – and the potential of Liverpool being crowned champions – rest on whether or not UEFA will decide to cancel this season’s Champions League; if they do, leagues will have to end by the resumption of play in the European competition.

The report adds:  “If (the Champions League is) postponed, it gives all domestic competitions breathing space to try and complete their own seasons, as all would fall under that umbrella campaign.

If annulled, it would mean all issues have to be decided before the planned start of the 2020-21 Champions League, which could create some tough decisions about league placings.”

The first qualifying round for this season’s Champions League was played in June.

Some of the dire consequences could involve the following:

O  A complete shutdown of the sport until September across Europe.

O  The cancellation of the Champions League and the Europa League, plus Euro 2020 this summer.

O   Football League clubs, many of whom are dependent on matchday revenue, going out of business.

O   Premier League clubs being urged to give financial help to those in the lower leagues.

O  The Premier League season being declared null and void, with no champions and, potentially, no relegation.

O  A huge transfer headache and questions over players whose contracts expire this summer, such as West Ham’s Pablo Zabaleta.

There are other possibilities floated, such as the Premier League being put on hold until it is deemed safe to play again – even if it overlaps into next season – and the season ending with the current placings.

O The reality is that Uefa faces three options = to finish the campaign whenever play resumes, even if it overlaps into next season’s calendar

O ending the league in May, even if no more matches take place with trophies, promotion and relegation going to the teams in those positions now;

O or writing off the entire campaign. The second and third alternatives would likely generate numerous legal challenges.

The clubs are largely in agreement with Friday’s decision but pressure will begin to mount in the coming week as the enormity of the situation begins to unfold.

The report says that Income streams will dry up but wages still need to be paid. Most Premier League clubs can survive a prolonged layoff but many EFL teams will become vulnerable in the coming weeks.

Many sources fear that scores of lower-league clubs could go out of business without regular matchday income, which makes up a much higher percentage of their revenues. This is one reason why the EFL were said to be particularly intent on finishing the season, for the welfare of their clubs.

Such a situation could see the Premier League come under pressure to offer financial assistance, but the top-division clubs could have additional problems.

Players whose contracts expire in June are placed in a difficult situation, and dealing with the transfer window becomes a much more complex issue.

Uefa are in a position to take the initiative and impose a uniform programme across the European leagues and Tuesday’s meeting will be crucial in mapping out the immediate future.

This is also why Tuesday’s Uefa videoconference is crucial. The fate of the 2019-20 season – and issues like whether Liverpool are declared champions – is almost entirely dependent on whether the governing body decide to annul this Champions League season or merely postpone it.

If postponed, it gives all domestic competitions breathing space to try and complete their own seasons, as all would fall under that umbrella campaign. If annulled, it would mean all issues have to be decided before the planned start of the 2020-21 Champions League, which could create some tough decisions about league placings.

Respite appears to be a long way off, however. Some medical projections suggest that the virus may not spike until midsummer. That would leave football struggling with a huge number of questions and very few answers.

The latter would mean that the three clubs in the bottom three, currently Bournemouth, Aston Villa, and Norwich, would be relegated.

Bournemouth, though, are level on points with West Ham and Watford and would surely challenge any such decision on the basis that the competition hasn’t finished.

It would also see Leicester City and Chelsea make up the top four behind Liverpool, who would be seen as champions, and Manchester City.

As the coronavirus crisis escalates, there appear to be no answers for the Premier League, who are at the mercy of UEFA.

So too are the clubs who make up the competition.