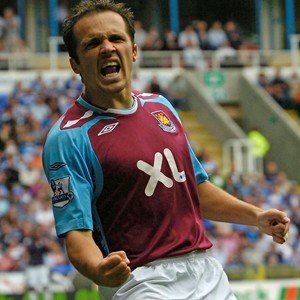 Former Hammer Matty Etherington was spotted at Millwall’s training ground for the first time yesterday. It is being reported that Etherington’s agent “reached out” to Holloway

He has been without a club since being released by Stoke boss Mark Hughes at the end of last season but Holloway has agreed a trial with a view of offering him a permanent move.

The 33 year old had been training with West Ham in order to keep match fit and is looking to secure a switch to the capital, where he has been based for most of his life.

Etherington,  played for the Hammers between 2003 and 2009.  joining at the beginning of our two-year spell in the second-tier of English football, playing the final season of the first division and the first season of the re-branded Championship.

Etherington was a fan’s favourite, scoring several goals including a hat-trick in a 5–0 win over Wimbledon. He won the “Hammer of the Year” award in his first season at the club and played a huge part in helping the club get to the 2004 Championship play-off final by scoring in the 2–0 win over Ipswich Town in the play-off semi final second leg.  He completed 195 games for West Ham, in all competitions, scoring 18 goals, before being sold to Stoke City for £2m in January 2009. Etherington later revealed to the press he would get on the West Ham team coach for away games and by the  journey’s end he would have gambled away that week’s £20,000 wages.  He revealed he estimated he lost £1.5million on greyhounds, horses and poker through his gambling addiction.