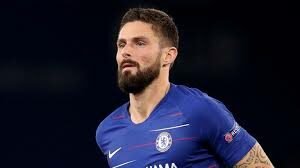 The fascinating possibility that Olivier Giroud could become a West Ham winter target has arisen out of quotes from the Chelsea striker.

The 33 year old has suffered following the rise and rise of Tammy Abraham who has been in outstanding form for Frank Lampard’s outfit.

Giroud has often been linked with the Hammers who were keenly interested when the Frenchman finally joined the Blues on his Arsenal departure.

Seb Haller’s fellow countryman is out of contract at Stamford Bridge next summer and a short term-move to the Irons could be on given his apparent possible intention to seek an exit from the Chelsea.

Despite rejecting a move to us in the past a move to east London on loan in the winter with the possibility of a short term contract following could now suit both parties as Albian Ajeti continues on a learning curve.

The Hammers interest at the time was very real and they could be tempted to follow up on a striker who scored 17 goals in 55 Premier, Europa Leagie and international appearances last season.

And speaking to Get French Football News, he said: ““I am going to fight for my place at Chelsea (until January),” Giroud.

“I don’t necessarily (want to leave). But there are things that mean… if I am forced to make a decision, I will make it like when I left Arsenal.

“Yes (I welcomed the international break). For different reasons, I have played little since the last national team break. Of course it feels good to make the difference.”