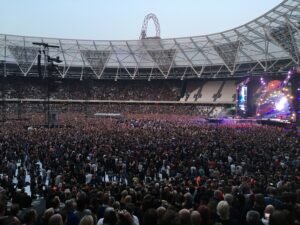 Music band Green Day have not postponed their concert at the London Stadium in June.

They were due to appears in Russia on 24th May before moving to Finland on 27th May but both those concerts have been postponed.

Gigs in Sweden and Norway in May have also been called off when tour dates for June in Germany, Denmark, Italy, France, Holland, Belgium, Czech Republic and Austria have also been postponed.

Three concerts in Scotland, London and Huddersfield remain scheduled for now in late June with the London Stadium still pencilled in for the 26th June.

A concert in Dublin,  Ireland on 29th June also remains on their website as does a tour of the US starting in July through to August.

That could change as we get closer to the June but the dates remain on Greenday’s own website for now.

It remains to be seen whether a sold-out crowd of 80,000 would be allowed to gather at the London Stadium in June but it seems like wishful thinking on the part of the organisers.

If football has to play behind closed doors for the foreseeable future how would 80,000 music fans be allowed to socially un-distance themselves in the stadium?