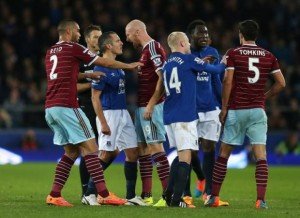 The FA has fined West Ham £20,000 after they pleaded guilty to a charge of failing to control their players at Goodison park.

Both Everton and West Ham were charged following an altercation just before half-time. The incident occurred when West Ham players took exception to a challenge from Kevin Mirallas on Hammers midfielder Morgan Amalfitano.

A statement on the FA website  today said: “Everton and West Ham United have each been fined £20,000 after the clubs admitted breaching FA Rules in relation to player conduct.“Both clubs were for charged for failing to control their players in the 40th minute of their fixture on 22 November 2014. The clubs accepted the standard penalty for this offence.”