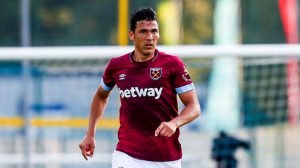 West Ham are hoping they will get a decision on Fabian Balbuena’s red card later today.

The FA arbitration team are expected to view videos of the sending off against Chelsea during the course of the day and give a response later.

‘The General’ was dismissed late in the game after his follow through from a good clearance caught Ben Chilwell.

And after VAR had taken a look and referred the decision to the pitch side TV cameras, the Paraguayan was later ordered off to universal derision.

It’s widely expected that as was the case when Tomas Soucek suffered a similarly poor red card from Mike Dean at Fulham the decision will be overturned.

As was the case then, the Hammers had no hesitation in appealing the position and hopefully the central defender will be free to take his place in the squad for the game against Burnley at the weekend.