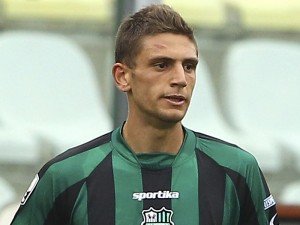 Currently on loan at Sassuolu the youngster shot to prominence in January when he scored all four goals in a home win over Milan.

And the front man – who is co-owned – has been making an impression at the loan club ever since.

Having scored 27 career goals in 64 appearances the player has also
also interested Manchester United but the Hammers believe they can steal a march at this stage of his development in the summer.

Whether or not Sam Allardyce remains in charge at the club will be immaterial as the owners are convinced that he’s a must-have player for any manager.

A source told ClaretandHughsaid: “He’s been scouted regularly and is one of those on the list.”