Posted by Sean Whetstone on November 7, 2019 in News, Whispers 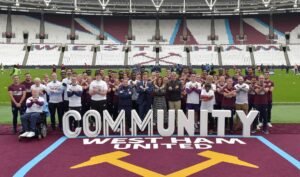 West Ham has committed to spend £28m by the end of 2021 in their players’ project which benefits the local community.

The club has already invested £18m in local community projects since 2013 with £5m spent last season, now they have committed another £10m more in spend.

At an anniversary event at the London Stadium celebrating the players’ project, the club revealed it is involved in 30 programmes which engage up to 50,000 per year.

Last year, £1.3 million was allocated for the benefit of Newham residents and this has directly supported approximately 12,000 people in the borough.

Players gave up a combined 300 hours of their time to directly work with 2,000 in the local area.

All of the Club’s players, along with the staff supporting them, have given up time in eleven different strands. Whether it’s Club Captains Mark Noble’s work with tackling poverty and Gilly Flaherty spending time with the members of the over-65s supporter group, Any Old Irons, to new Club-record signing, Sebastien Haller choosing the Local Enterprise strand.

One comment on “Hammers commit to £28m spend on players’ project”