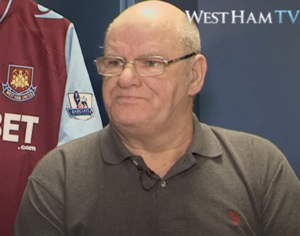 West Ham married couple Ken and Betty Hill sadly passed away last week with days of each other.

Ken was Chairman of the Official West Ham United Supporters Club while his wife Betty was also on the committee for many years.

Announcing the news to their members the Supporters club said on Email: “Unfortunately, we have some very sad news to pass on to members.  Former Committee members Ken and Betty Hill who many will remember from Castle Street have both passed away after contracting the virus and we send our condolences to their friends and family and everyone else who has lost someone recently. We don’t know any details regarding funeral arrangements but we will endeavour to ensure that the Supporters’ Club condolences are passed on to their family.”

I personally knew Ken and spent some time on the West Ham Supporters Advisory Board with him.

They will both be sadly missed with the West Ham community and Claret and Hugh add their condolences and sympathies to the Hill friends and family.

Ken spoke to West Ham TV seven years ago before the move to the London Stadium.