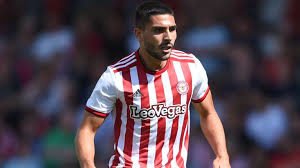 News that we were tracking last season’s  28 goal front man had been all over the media this morning but a senior Hammers insider made it clear to CandH that  he is not on the club’s list of options.

He denied categorically that any move had been made at all adding: “It’s another one you can put down to the silly season – not true.”

Maupay had been lined with ourselves, Villa, Aston Villa and Sheffield United with reports that we could be set to offer him a five year deal.

The story seemed to have legs on the back of the Bees having allowed him three days off from pre-season amid reports that his mind wasn’t right to take part at this stage.

It was also claimed that he is attracting interest from clubs in Spain, after his exploits at Brentford since arriving from St Etienne.