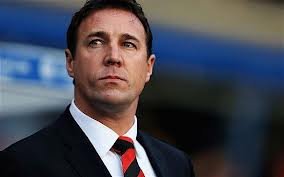 The former Watford boss is reported as being faced with a “quit or be sacked” ultimatum from the City owner Vincent Tan.

And Claretandhugh learned earlier today that the Irons board have always seen the 41 year old Scot as a priority candidate were they decide to release Sam Allardyce.

The victory over Spurs has eased the pressure on the 59 year old and despite private and public pledges of support, the situation could change if Mackay comes onto the market.

The BBC reported tonight (Thursday) that a letter emailed to Mackay from San, the owner is alleged to have listed the  depth his grievances with the Scot.

He is claimed to have criticised his signings, transfer budgets, results on the pitch and style of play as well as questioning the former Watford manager’s record as a boss.

The Hammers refuse to budge from their public position that now is not the right time to allow Allardyce to leave but sources have told us that Mackay is widely admired, notably by co-owner David Sullivan – ironically Cardiff born.

Allardyce has a tough programme of games coming up with Manchester at Old Trafford on Saturday before Arsenal visit on boxing Day and West Bromwich Albion on the 28th.

And were things to go badly and with Mackay on the sidelines the club could move in on the Scot who played 18 times for the Hammers during the 2004-05 season after being signed by Alan Pardew for £300,000.