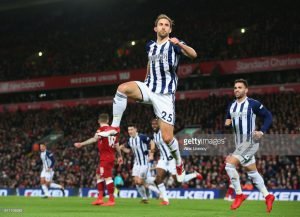 West Ham will face competition for a possible list of West Brom targets – notably Craig Dawson – should we remain in the Premier League this season.

Burnley and newly promoted Wolves are among those who fancy central defender Craig Dawson – believed to be one of those with a relegation clause in his contract.

The same situation appears to apply to several others, including Jonny Evans – another Hammers target – who is available for around £3 million.

Most Albion players will have signed up to deals which ensure that they will have to take a cut in wages should they slip into the Championship.

And despite a a recent mini survival it would be one of the greatest miracles ever in football were it to happen.

Given all of that it seems likely that a mass exodus via a fire sale is on the cards from the Hawthorns with others such as  Kieran Gibbs, Jay Rodriguez and Jake Livermore also likely to be available.

One comment on “Hammers face rivals for big target”