Hammers Fans to own West Ham

Posted by Sean Whetstone on April 1, 2017 in News, Whispers 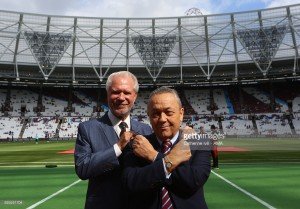 West Ham owners David Gold and David Sullivan have come up with an ingenious way to boost season ticket renewals for next season.

For 12 hours only, until midday today the owners will give away shares in West Ham United for anyone who renews their season ticket at the London Stadium before the noon deadline.

The special once in a lifetime offer will give supporters the equivalent value in West Ham shares as their season ticket renewal price. You will also be allowed to pre-buy season ticketsfor up to 98 years in advance  for the remainder of the lease of the new stadium as part of the offer.

One season ticket holder who renewed their London Stadium band 1 season ticket for the £88,102 for the next 98 years called it great value for money.  He told Claret and Hugh “I missed out on the bond scheme in the nineties so I am glad I was able to take up this fantastic offer from the board, I can hand my season ticket down to my children and my children’s children while being a part owner of the club”

8 comments on “Hammers Fans to own West Ham”