Posted by Dave Langton on September 9, 2022 in News, Whispers

The Premier League has announced that all matches this weekend are cancelled after the death of Queen Elizabeth II.

The governing body has issued a statement confirming that the games are postponed as the nation prepares for a week of mourning after the monarch passed away on Thursday. 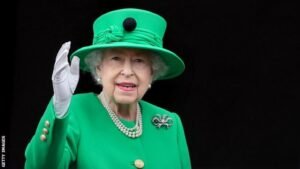 The government has issued guidance that says there is no obligation for the league to suspend matches if they do not wish to but a statement has now confirmed that it will, indeed, suspend the fixture list.

The statement on Friday morning read: “At a meeting this morning, Premier League clubs paid tribute to Her Majesty Queen Elizabeth II. To honour her extraordinary life and contribution to the nation, and as a mark of respect, this weekend’s Premier League match round will be postponed, including Monday evening’s game.

“Further updates regarding Premier League fixtures during the period of mourning will be provided in due course.”

There are said to be concerns over the number of police that can attend matches, while other clubs feel it is the right thing to do as a mark of respect.

It remains to be seen where these games will actually be played given the congested nature of the schedule, but West Ham will not be playing Newcastle this weekend.