Hammers had £127m on the bench

Posted by Sean Whetstone on February 21, 2020 in News, Whispers 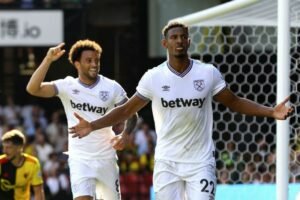 David Moyes had a total of £127m of players on the West Ham bench at the Etihad on Wednesday night on what must be a club record.

Pablo Fornals who cost the Hammers another £25m last summer could not even make the bench.

By comparison, the Hammers  starting XI only in Manchester cost the club £72.m to assemble

It remains to see who the manager will leave on the bench for Monday’s away game against Premier League leaders Liverpool.