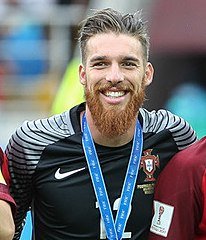 West Ham are being reported as having become leading contenders to sign Olympiakos goalkeeper Jose Sa.

According to Greek media outlet to Sportime the 26-year-old’s contract at Olympiakos includes a release clause worth £12.8million but apparently  the goalkeeper’s agent Jorge Mendes is not planning a transfer until next summer.

It is understood that there could be interest in Jose Sa when the January transfer window opens but should the Mendes scenario prove to be the case that’s just not going to happen.

The Hammers are certainly looking for a keeper and it seems coincidental that when no names had been linked previously suddenly this one has popped up out of nowhere once it becomes known the club are on the look out.