Hammers linked with ‘the Portuguese Hazard’ 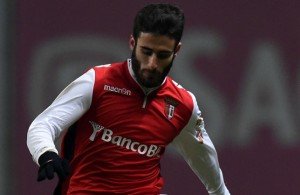 The 22 year old is also wanted by Manchester United, who have been scouting him in Braga games for some time.

Silva has played 15 matches this season scoring four goals and making five assists so far. His buyout clause is believed to be around 20 million euros.

He has been a key part of Braga’s unexpected rise to the Premiera Liga top-four, and has been likened to Eden Hazard and former Chelsea midfielder Deco with some dubbing him ‘the Portuguese Hazard’. Liverpool are also thought to have watched the 22-year-old in action. Any deal to bring him to the Premier League is likely to cost in the region of £15 million.

As we have said before, and we will say it again, there is no official budget for the January transfer window for West Ham and we have been told that funds will only be available in the unlikely scenario a player is sold in January.

Should that happen there many more positions in need of strengthening than bringing in another winger so we are going to take this rumour with a large pinch of salt.

2 comments on “Hammers linked with ‘the Portuguese Hazard’”