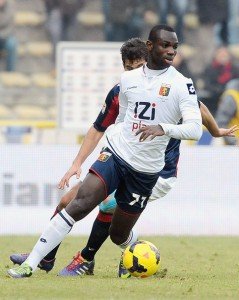 The story emerged this morning, probably as a result of the growing Senegal connection, but top insiders were quick to knock the rumour down

There has been no formal comment on the story until now but when ClaretandHugh approached it’s best source inside the club we were told: “There’s nothing in that whatsoever – someone has a rich imagination.”

Newcastle and Aston Villa are reported as being interested but we are entirely convinced Upton Park is not a destination for the guy who replaced Diafra Sakho at January’s Africa Cup of Nations.

He came off the bench to score twice in his country’s 2-1 win over Ghana and has scored 11 times in 17 appearances for his club, Swiss side FC Sion, this season.

← Amalfitano: Why I signed
Valencia “chat” despite watertight contract →
Click Here for Comments >