Hammers on the Rafa link 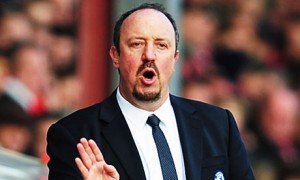 West Ham are still tracking Rafa Benitez as a replacement for Sam Allardyce at the end of the season but fear they will be unable to attract the former Liverpool boss.

Benitez is definitely keen on a Premier League return after what is seen as a disappointing season with Napoli who sit in fifth place in Serie A – twenty points off leaders Juventus.

And the 1-1 home draw against 17th Atalanta at the weekend only cranked up the pressure on the former Kop boss.

With his family still in Liverpool – where they are  very settled – Benitez was reported by former Kop keeper Pepe Reina – as being ready to make a PL return.

And sources inside West Ham admitted to ClaretandHugh this morning that he is a manager who would be very much a target were he available.

However one added: “Our understanding is that he wants either Liverpool or Manchester City. He’s a top manager and most clubs would be interested but whether we could attract him is another question. ”

4 comments on “Hammers on the Rafa link”