Hammers set to move up their Gomes bid 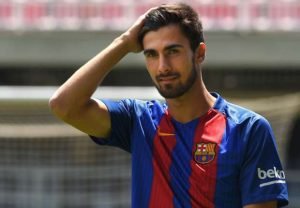 West Ham are ready to raise their offer for Barcelona midfielder Andre Gomes who spent an impressive loan spell at Everton last season.

A top ClaretandHugh senior source has already told us by e mail that Gomes is a player they like very much and accept that £18 million won’t get him.

Now the club is doing its sums and could be ready to go as high as £25 million for the Portuguese international star to whom Manuel Pellegrini is attracted.

Personal terms will be relatively easy to settle with Andy Carroll leaving and the near 90k he earned topped up by another £10k a week or so.

Pellegrini is desperately keen to bring the player in and so far the club has answered every call he has made.

The Times reported that the player has become his priority signing and it seems unlikely the Irons look unlikely to let him slip away.

Barca are believed to want around £30 million but £25m could clinch a deal.

8 comments on “Hammers set to move up their Gomes bid”