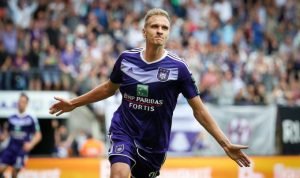 Anderlecht forward Lukasz Teodorczyk has become a serious target for the Irons according to Belgian TV station RTBE.

Anderlecht  have only recently signed the striker  on a permanent basis following a loan spell  but it seems the Belgian club is looking to make a quick profit on the Polish international at the end of the season.

Teodorczyk has scored 28 goals in 41 matches in all competitions this campaign after joining from Dynamo Kiev on a season long loan last summer.  Anderlecht have paid €4.5million (£3.86m) for the player, with the striker joining on a three year deal until 2020.

However, RTBF reports however that the 25 year old will be sold for €15million (£13million) in the summer, but they say the Hammers will have competition from the likes of Liverpool, West Bromwich Albion, Sunderland and AC Milan.
Permalink

One comment on “Hammers set to raid Anderlecht for top striker”