Posted by Sean Whetstone on November 30, 2016 in News, Whispers 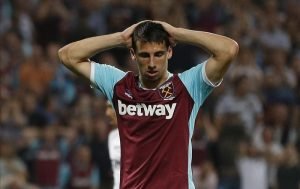 Sevilla Fc is interested in taking Jonathan Calleri on loan for the second half of the season claims www.estadiodeportivo.com.

Sevilla had already been tracking the Argentine player before West Ham came in for him for a season long loan but the report claims they are ready to reignite their interest in offering him a way out of the Premier League. The article claims Calleri has decided to leave the Hammers and there are many teams interested in loaning Calleri  but the player has not yet sat down with Slaven Bilic to discuss his future with West Ham.

ClaretandHugh understands the player is currently injured and out for up to six weeks after picking up an injury with the youth team. Rumours also suggest Calleri is no longer in the UK and was spotted in Argentina at the All Boys vs Atletico Parana match last weekend. Yesterday Slaven Bilic confirmed to reporters that Calleri is still contracted to the club despite reports last week that his contract had been terminated by mutual consent.

One comment on “Hammers Striker exit rumoured in January”