Hammers to face Spurs, Newcastle and Stoke in Cup 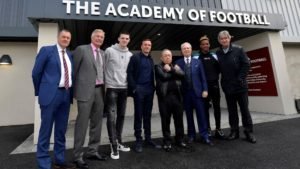 West Ham’s U18 and U16 teams will take on equivalent Category One Academy sides from Newcastle United, Stoke City and Spurs in this season’s Premier League Cup competitions.

The groups are identical in both the Under-18 PL Cup and the inaugural Under-16 PL Cup, with West Ham drawn in Group E of both tournaments. Both Academy sides will play on the same matchdays during the group stages, and will face off against each other side in their group once, either home or away.

The young Hammers will need to either win their groups, or be one of the two best-placed runners-up among six groups, to advance to the knock-out stages.

The U16 PL Cup has been introduced this year to mirror the U18 competition.

In last season’s U18 Premier League Cup, the youngsters were eliminated at the group stage, despite beating eventual winners Manchester City 3-2 at the Little Heath Sports Ground.

One comment on “Hammers to face Spurs, Newcastle and Stoke in Cup”