No injury concerns for Wilshere 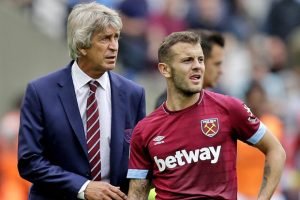 Jack Wilshere has no injury concerns and will be available for Watford this weekend.

There were concerns when the 27-year-old was substituted at half time at the Amex stadium for Michail Antonio but the manager has insisted he is still building up his match fitness as he hasn’t played a competitive game for a full 90 minutes in a long time.

Pellegrini told reporters at the post-match conference last weekend “Jack is like Carlos Sanchez, Andriy Yarmolenko and Manuel Lanzini – who played a lot of games in the last part of last season – he needs time of course. He hasn’t played 90 minutes in a long time, so in every game and every minute he has he will be improving.”

Wilshere was also substituted in the Premier League opener against Man City at the London Stadium after 56 minutes being replaced for Robert Snodgrass after appearing to suffer from a dead leg.

Last week it emerged that Wilshere is paying for physiotherapist Declan Lynch to come over from Ireland to work with him twice a week in private sessions. The midfielder believes the sessions with Lynch which are held away from the training ground will pay dividends and Pellegrini says he has no objection as long as he has a fit Wilshere at his disposal.

6 comments on “No injury concerns for Wilshere”