Gonzo hands out his marks

Fabianski: Made a good save for the opening goal but could only deflect it back into the path of Ivan Toney. Hesitancy when trying to distribute almost resulted in a costly mix-up. Great save from Ghoddos. 6

Dawson: Went close from a corner in the first half, made the usual trademark crunching tackles. Should have won the header to thwart the opening goal. Could have scored twice. West Ham’s biggest goal threat. 6
Ogbonna: Too loose with his marking for the throw-in for Brentford’s second goal. Looks well off the pace for Premier League football. 4
Cresswell: Played well enough up until the Bee’s second when he was embarrassingly outpaced and unable to stop Da Silva. 5
Coufal: Should have defended the long throw-in better for Brentford’s opener. Such a willing runner but lacks the technique to truly excel as a wing back. 6 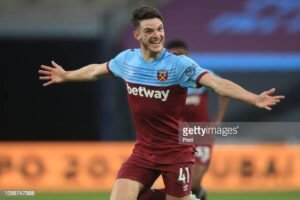 Emerson: Reacted slower than Ivan Toney for the first goal. Forced a good save from the keeper as West Ham piled on the pressure. No real impact on the game. 4

Rice: Hit the post early on with a long range shot. Maybe his marking should have been tighter for the first goal but had a good game between the boxes. The outstanding midfielder on the pitch. 8
Paqueta:4 Deployed in his more familiar position in central midfield. Looks lost and out of sync with his teammates. Awful passing at times. 4
Benrahma:7 Very direct and continued his good form from the first whistle to the last. Always looked threatening. 7
Bowen:7 Looked sharper and more involved. Almost won a penalty with a driving run. Better delivery from corners. 7
Scamacca:3 Not really involved despite West Ham having long periods of possession and pressure. Finally had a shot in the 75th min. 3
Antonio:3 63rd min sub for Emerson as Moyes tried to find a way through the Brentord defence. Embarrassingly missed the ball completely when attempting to shoot on goal. 3
Soucek: On as an 82nd min replacement for Paqueta.
Permalink