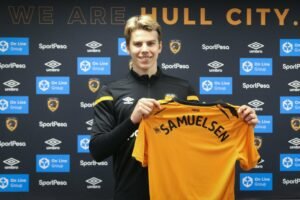 Hull City have completed the permanent signing of attacking midfielder Samuelsen on a two-and-a-half year deal with an option of adding a further year.

The 22-year-old has gained first-team experience in a series of loan moves in recent seasons, including two loan spells at Peterborough United where he worked with current Tigers Head Coach Grant McCann, along with stints at Blackburn Rovers, Burton Albion, Dutch side VVV-Venlo and most recently FK Haugesund.

Samuelsen impressed for his hometown club in the Norwegian top-flight last term, scoring 14 goals in 39 appearances in all competitions, before returning to West Ham this summer.

Speaking after putting pen-to-paper at the KCOM Stadium, Samuelsen told the Hull City official website: “I’m really excited to be here. It was an easy decision to join Hull City, especially so with the Club’s recent history.

“The manager was also a big factor. I know him well from my time on loan at Peterborough earlier in my career. He was a big influence on me during my time there and I’m looking forward to working with him again. I can’t wait to get going.”