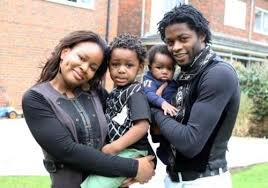 West Ham believe the odds of the club landing Alex Song are marginally better than fifty/fifty and that may be down to the player’s wife Olivia (right).

Despite reports in The Sun that a “deal is on the table” to make his move to the club permanent, that is not the case.

However, the Irons are ready compete fiercely to get their man at the end of the campaign and that may even involve them going as high as £90k a week on his personal terms.

That though will be dependent on the transfer fee being demanded by Barcelona who are expected to want around £10 million which would make such personal terms possible.

A club source explained: “It’s far too early to start making hard and fast predictions and these are obviously estimates and guess-timates but they are our early thoughts.

“Olivia is quite influential in this because London is her preferred city globally and for various reasons  Arsenal, Spurs, Chelsea and of course QPR out of the running it looks good for us.

“Here, he becomes our leader and first name on the team sheet. All of that will be very appealing to him, we’re sure.”

Liverpool are still reported as being interested but our source claimed: “I think he’d stay here at £10k a week rather than go to merseyside. I think it’s a lifestyle thing on that front.

Hammers boss Sam Allardyce is reported as saying: He said: “He came through as a kid at Arsenal and then it was Barcelona so he has had nothing other than playing for top clubs in Europe.

“Our aspirations are to get there and a player like him would help us, that’s the one thing we can sell him — particularly going to a new stadium with 54,000 people in.”

He added: “Clubs might have a bigger history and tradition than ours but it is not always the case that they will succeed against you.

“Alex moved to Barcelona which he thought was one hell of a move and unfortunately he did not play, or as much as he wanted. It’s fine being at these clubs but it’s not if you’re not playing.”