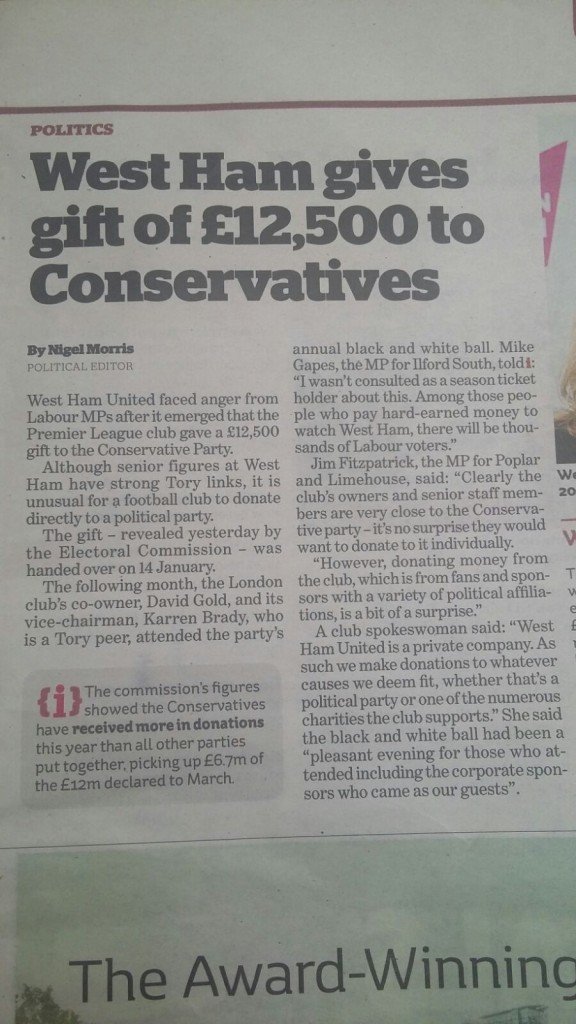 West Ham have decided to swim in some murky political waters.

It emerged this morning that for reasons of their own they have donated £12,500 to the Tory Party which frankly seems bizarre at best and totally out of order at worst.

The explanation they have given via a spokesman is that as a private company they “make donations to whatever causes they see fit.”

Whether or not many fans would agree that this is a worthy cause can be judged by this cut http://www.mirror.co.uk/news/uk-news/inside-tory-black-white-ball-7335521

Ok, in the great scheme of things £12.5k is nether her of there and let’s remember that Karren Brady is a Tory peer, David Gold is a regular donor to the party whilst David Sullivan once described himself as a moderate Conservative.

Whatever one’s politics, and I readily admit I don’t share theirs,  it’s a strange and odd decision given the tribalism involved in politics.

It should be added – for balance – that the club supports many other charities but gifts to political parties? That will attract a lot of criticism at a time when they are auctioning club memorabilia off to support the Hammers academy.

Frankly, it wouldn’t matter to me which party was the beneficiary of a £12.5k gift from a football club. I would consider it ill advised, unnecessary and wrong because it is divisive.

Surely if they want to hand cash over the the Conservatives it’s best done out of their own pockets.

Not sure that our manager – an avowed Socialist – will be very impressed either!