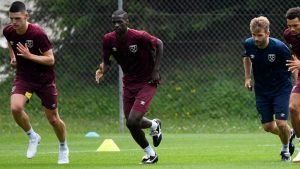 West Ham have slammed the door on any major players leaving the club following the departure of Cheik Kouyate.

There have been rumours and speculation surrounding the likes of  Pedro Obiang and Michail Antonio with some believing Chicharito could be on his way.

But the club has no intention of letting anyone leave apart from fringe first teamers  such as Edi Fernandes, Sam Byram, Reece Oxford and Jordan Hugill should buyers emerge over the next week who are ready to pay the right money.

It was made clear to Pedro Obiang that, although he was attracted to a move back to Sampdoria who had made an offer, there was no time left for the Irons to find a replacement.

Fernandes and Byram are  rated at around £5 million with Hugill on offer at about £7 million – a player who is reported to have attracted interest from his hometown club Middlesbrough.

The Hammers reluctance to allow any further departures from the club is a real  statement of intent as they prepare for what they hope will be a season of real achievement.