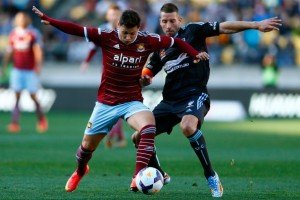 West Ham are in no rush to push through the Mauro Zarate loan deal to Queens Park Rangers.

Harry Redknapp and the club are understood to be trying to get a cut price arrangement and the Irons are having none of it.

With 14 other clubs interested, including Newcastle, Sunderland, Torino, Valencia and others as far afield as Mexico, the Hammers have no need to lower the loan terms

Reknapp remains keen on the player but a Hammers source told ClaretandHugh: “Things should become a lot clearer on the Rangers thing this week but we are certainly not short on other options.

“And despite the public fall-out between Mauro and the manager, with Diafra Sakho injured there’s no need for us to be rushing a deal through for the sake of it.

“We all understand how frustrated Mauro feels at the moment but the deal has to suit all parties when it gets donme.

“And with that amount of interest out there, it’s pretty obvious that this is a very decent player we are talking about regardless of what may or may not have been said.

“There’s certainly no way we’ll be held to ransom by QPR. They know the terms if they want the him.”