Lanzini started his career with Pellegrini 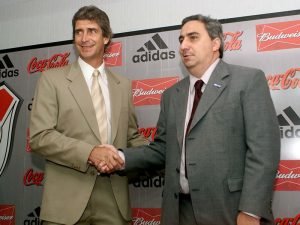 Manuel Lanzini only aim as a young boy was to play for the football team he supported as  a youngster and that was River Plate.

He turned down a trial with Boca Juniors and was later rewarded when his dream was finally granted when he joined River Plate in 2002 aged just nine.

Now the midfielder,25, will become a key player as Pellegrini 16 years on as the Chilean manager aims to rebuild the Irons.

Manu began as a playmaker in junior divisions working his way through the ranks. In 2008 aged 15, River Plate won the junior division’s Superclásico 3–0 to Boca Juniors with Lanzini scoring 2 goals and assisting the mentioned Salguero in other. He later made his senior debut in 2010 before leaving in 2014.

Lanzini’s first year at River Plate crossed over with Manuel Pellegrini. He managed the Argentine club from 2002 to 2003 and secured the Clausura championships in 2003. He resigned his post at the end of his successful campaign.

← Pellegrini’s recipe for getting best from everybody
Report: Hammers are favourites to sign Barcelona defender →
Click Here for Comments >

One comment on “Lanzini started his career with Pellegrini”