Posted by Dave Langton on December 28, 2021 in News, Whispers

Mark Lawrenson has backed the Hammers to lose against Watford on Tuesday.

The Hammers are looking to get back to winning ways against the Hornets, who have not played since before Christmas as a result of a Covid outbreak within their squad. 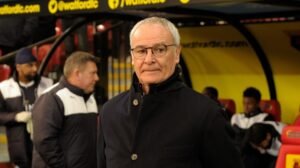 They are currently one place above the relegation zone, while the Irons were beaten 3-2 by Southampton on Boxing Day.

West Ham have won just one of their last five games, and the same goes for Watford, but Lawro, who famously takes against the Hammers, believes that the Hornets will take all three points when the two sides meet.

Writing in his BBC Sport column ahead of the midweek fixtures, he wrote: “This is the first time Watford have played since 10 December while West Ham have had four games since then, and not won any of them.

“The Hornets have been hampered by being unable to train properly because of a Covid outbreak at the club but they will be rested and ready for this one.

“The Hammers seem to be playing every other day, and they have been losing a lot of the time.

“They are clearly missing injured duo Angelo Ogbonna and Kurt Zouma at the back and it might be that their poor run continues until they can bring in more numbers in January.”

Lawro’s prediction is a 2-1 win for Claudio Ranieri’s men, which would give them some distance from the drop zone.

The Hammers, meanwhile, would fall further away in the race to finish in the top four, so we’ll have to hope that the old curmudgeon isn’t right!