Posted by Sean Whetstone on October 12, 2019 in News, Whispers 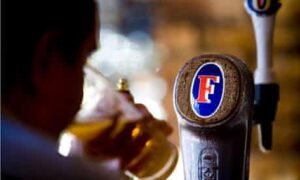 London Stadium caters Delaware North has promised to look into bringing in a cheaper beer for West Ham match days after receiving feedback from fans that the current beer offering are expensive.

Senior management from the American caterers were at the West Ham United Official Supporters’ board last Tuesday when there were asked by members why the cost of Amstel had risen to £5.30 per pint with Heineken which they class as a premium beer reaching £6 per pint at the London Stadium.

The caters blamed a rise in wholesale rises from the brewery insisting the prices were still comparable with other London football clubs of Arsenal and Chelsea.  They claimed Spurs are offering promotional prices at their new stadium which are subsidised and the cheaper beer was only available at thirty per cent of their bars.

Delaware North did make a promise that there will be no further price rises for beer this season and they would look at the feasibility of selling a cheaper beer like Fosters at the stadium as a trial to auage demand.

8 comments on “London stadium caterers to look at cheaper beer”