London Stadium to trial Wembley barriers to save costs 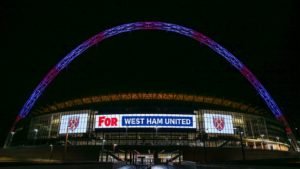 London Stadium owners E20 have proposed a trial of new lateral barriers to act as a deterrent for pitch invaders in an attempt to improve security and lower stewarding costs.

Director Alan Skewis told the E20 board earlier this year that lateral barriers were already used at Wembley stadium and that the post Burnley and Spurs recommendations had identified that this type of barriers could act as a real deterrent for pitch invaders while saving on steward costs.

He suggested a trial to test the concept and effectiveness before spending further funds to cover teh full 381 metres around the stadium. The 30-metre trial area is proposed to be in front of the lower West Stand in blocks 113 and 114.

No time scales were given in the E20 board minutes recently published on the London Stadium transparency website.

The Chair of E20, Nicky Dunn requested Graham Gilmore speak to Wembley stadium to see if they would recommend the use of these barriers.

← London Stadium naming rights to be sold
Fabianski: ‘It is about performances’ →
Click Here for Comments >