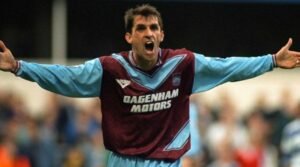 The pair spoke about West Ham’s 2-0 defeat against Manchester City on Wednesday night and David Moyes’ role as manager.

Maybe Allen should join the manager’s backroom team and give a team talk.

You can hear the full seven-minute interview below: