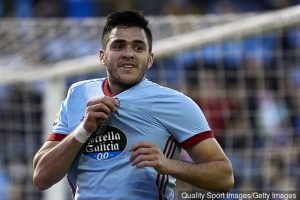 Sky Sports reported that identical bids of £29 million had been lodged by the Irons and Valencia earlier in the day.

But CandH has been told the Hammers have bid in the region £25m although it is not known what offer Valencia has tabled for the Celta Vigo striker.

While Gomez would get to play in the Champions League with Valencia, West Ham are able to offer him significantly higher wages approaching £100,000 per week which would make him one of the highest paid players at the London Stadium.

And we were told Mario Hussilos is understood to negotiating with both Celta Vigo on the fee and Gomez ‘s representatives on personal terms as he bids to get the transfer over the line.

Owners David Sullivan and David Gold are giving Pellegrini and Hussilos their full support and financial backing to do what it takes to make the deal happen.

They are expecting more sales from the club but may well be ready to stump up further cash if it’s required to outbid Valencia.