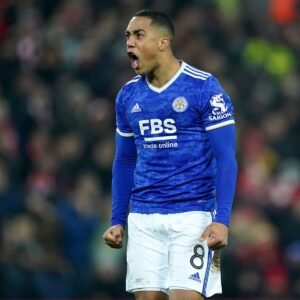 West Ham boss David Moyes will be keeping a very close eye on Foxes midfielder Youri Tielmans who is part of the team which faces us at the Power King Stadium today (Sun).

For the Belgian midfielder – valued at around £40 million – having been a regular in the side is out of contract in the summer of 2023 with Moyes  reported to be keenly interested.

The 5ft 8in star cost City 32 million in 2019 but is now disinterested in signing a new contract with the club and his agents have made the position clear over recent months.

However, the Irons will have a major job attracting a player who has also been linked with Manchester United, Arsenal and Chelsea although Newcastle too will be on the case according to speculation.

However, Moyes can be the most persuasive of individuals and having been on the case in bidding for Leeds star Kalvin Phillips it’s clear midfield is an area he will be looking towards come the summer.