Thilo Kehrer will make his West Ham debut against Brighton on Sunday.

The defender joined the club earlier this week from PSG and has been flung straight in at the deep end. 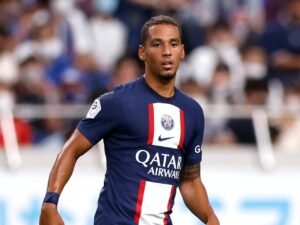 Indeed, due to a number of injury absentees, Kehrer is selected to play alongside Kurt Zouma in defence, with Vlad Coufal restored to right-back and Aaron Cresswell at left-back.

There are no other changes to the team that lost to Nottingham Forest last week.

It means that summer signings Maxwel Cornet and Gianluca Scamacca are on the bench, having featured in the midweek Europa Conference League win over Viborg.