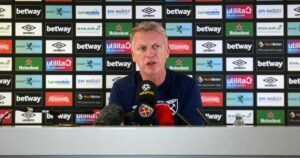 David Moyes says he was pleased with his team’s performance.

Speaking in his post-match press conference he told reporters “The players did well defensively, especially considering I started a young right back on debut. Pleased with the players’ performance, we were a bit limited so we made the most of what we could.”

He explained  “We have talked about their speed on the counter-attack and more importantly, not putting it near Van Dijk’s head as he just heads them away. That was disappointing, to lose a goal to a penalty was bad enough and then a counter-attack, it was disappointing I think they were well organised, disciplined when they had to be. Organisational wise they did really well, the effort of the midfield boys was excellent. Whatever you try to o to stop, they go other ways around you. Tryng to compete with them is tough.”

On his choice of young right-back Ngakia he added” I didn’t tell him until today but I had in my mind I would do. I wanted to give Zabaleta a rest. He done great, after the opening ten minutes when he got shocked a bit by their strength and did a lot of good things.”

One comment on “Moyes pleased with West Ham players performance”