David Moyes has revealed that the club have some concerns over the availability of Tomas Soucek against Liverpool.

The Czech Republic international sustained a brutal looking head injury in the FA Cup defeat to Southampton in midweek, with blood gushing from the wound. 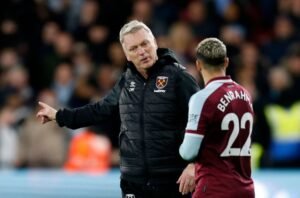 The midfielder actually took to Twitter afterwards to insist that he would be available for the clash with the Reds but Moyes appears to have contradicted him in his pre-match press conference ahead of the game against the Reds.

Soucek had to have stitches in his head as a result of the injury and Moyes admits there is concern that the injury could open up again if he plays against the Reds and is in the wars again.

The Irons boss has also said that Ryan Fredericks could soon return, along with left-back Arthur Masuaku.

Speaking to reporters ahead of the game against Jurgen Klopp’s side, as per Football.London, Moyes said: “Like everybody, we’ve got a few injuries and a few players out, but we’ve also got some players coming back. Ryan Fredericks is doing better and so is Arthur [Masuaku].

“We’ve got a concern about Soucek because of the stitches in his head, but we’re probably no different from any other club – we’ve got some injuries.”