No rest for the Hammers 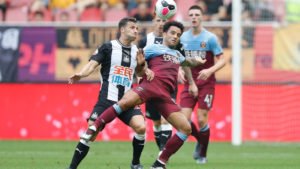 Manuel Pellegrini and the first team squad will report for training at Rush Green tomorrow (Tuesday) despite only landing back in London from China yesterday (Sunday).

The players will only get one full day off  (Monday) to recover from their Chinese tour and the jet lag before hitting the training ground again.

Both Pablo Fornals and Sebastien Haller will join up with the squad at Rush Green tomorrow as will Fabian Balbuena and Arthur Masuaku. Next stop in their pre-season campaign is Fulham at Craven Cottage this Saturday.

Following the game at West London, the squad fly off to Austria again for their second summer training camp where they will face Hertha Berlin on 31st July.

It is then a quick turnaround and flight back to London to face Athletic Bilbao in the Betway cup on Saturday 3rd August one week before they face Manchester City at lunchtime in Stratford for the start of the 2019/2020 Premier League season.