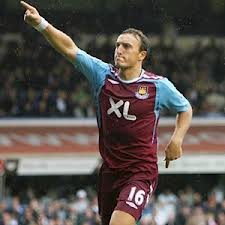 Current skipper Mark Noble has been crowned the greatest West Ham captain since the Premier League started in 1992.

Nobes pulled in over 48% of the vote with nearly 900 readers casting their vote.

Kevin Nolan was placed second with over 22% of the vote with Julian Dicks third with 15% of the votes cast.

Paolo Di Canio received 2% of the vote with Nigel Reo Coker, Christian Dailly, Matty Upson and Joe Cole pulling in less than 1% each.

Born in Canning Town, Noble played for Barking Colts and moved to Arsenal’s academy at age 11. His father, however, who would drive him to training, could not always arrange the time to get Noble to training sessions due to the distance from their home in Beckton. West Ham signed Nobes as a youth player. He became the youngest player ever to appear in their reserve team, aged 15. He became made his debut in the senior team at the age of just 17 in the League Cup in August 2004 in a 2–0 win against Southend United. He made his league debut in the Championship in January 2005, in a 4–2 defeat away at Wolverhampton Wanderers.