Noble looks to be the missing link 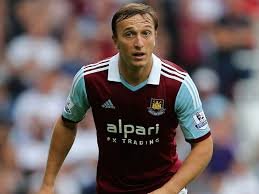 Another disappointing afternoon has left everyone debating what has gone so horribly wrong lately for the Hammers.

Much has been said and written about Sam Allardyce’s tactics or squad selection, Andy Carroll’s form compared to Enner Valencia, Mauro Zarate being shunned out of the squad instead of the likes of Carlton Cole and many other theories and opinions.

All of these may have played their part as well as fatigue from a packed Christmas fixture list and some bad luck from referee decisions going against the team.

The Arsenal game was deserving of at least a point which can maybe act as some sort of consolation for the fans. Likewise to ease the pain, no one expected anything away to Chelsea.

However for me, over the entire Christmas period, there is one thing that stands out over everything else and that is the absence of Mark Noble.

Since his return to the squad from injury, he has not featured in the first team despite being a regular until injury sidelined him. Noble is a workhorse who bleeds passion and desire.

Today’s match against West Brom is a great example of why West Ham have missed Noble’s presence in the team. With some of the players feeling the effects of playing so many games in such a short space of time and the complacent attitude towards the opponents I believe Noble would have made a huge difference.

A lot of players (and fans) seemed to think that three points were already in the bag today. This was even more evident after Diafra Sakho’s opener on 10 minutes.

The team took the foot off the pedal and let West Brom back into the game. Even in the second half the players wlacked urgency and desire to kill the game and bag all three points. Had Mark Noble been playing today he could have been the driving force behind a West Ham win.

How many games this season has the team been in front and carried on with the job in hand and killed the game off? Or for that matter when the side have been losing and come back to win the game?

It is all to do with the attitude and desire on display and as foolhardy as it would be to say that Noble is the only player that can muster the required oomph to keep going, it is plain to see the difference when he isn’t in the team.

Yes, by all means we can point out the lack of the coveted Valencia-Sakho partnership or the countless other things that have gone against us lately.

But if you want a nutshell explanation there is no need to look any further than this: Should there have been a stronger desire and urgency in the last two games – a draw would have been earned against Arsenal and a win would have been rescued today against West Brom

And there is no better player at injecting the right mental attitude required than Mr West Ham himself; Mark Noble.

Disclaimer: These views are those of the blogger and are not necessarily shared by ClaretandHugh

4 comments on “Noble looks to be the missing link”