Posted by Sean Whetstone on April 1, 2016 in News, Whispers 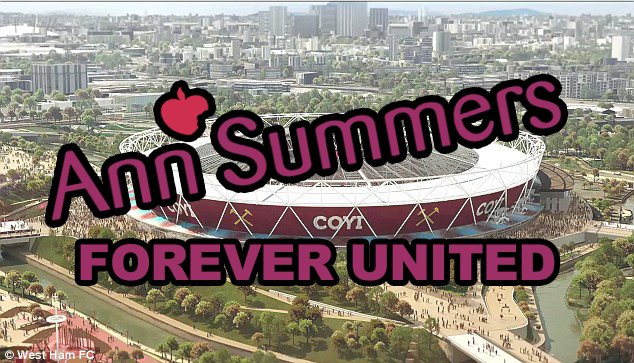 Claret and Hugh understands that high street lingerie retailer, Ann Summers has won the bid to become the naming rights partner for the former Olympic Stadium. The Olympic Stadium will be renamed the Ann Summers stadium this summer ahead of West Ham’s first match in August.

As part of the estimated £3m per year sponsorship deal, Ann Summers will have a concession outlet inside the new West Ham stadium store to sell their goods including a new collection of West Ham branded lingerie.

The deal will also see the creation of a pink and blue third kit for next season in a promotion that will see West Ham football shirts stocked in all Ann Summers high street stores across the UK, Ireland, Channel Islands and Spain. The new digital wrap will be redesigned to look like a black lace garter.

The first Ann Summers shop was opened in 1970 in March Arch, London, from which it grew to six shops. Ann Summers was purchased in 1971 by West Ham co-chairman, David Gold, who established the high street brand and lingerie boutique which now has a turnover of over £140m per year. West Ham fan, Jacqueline Gold  is the Chief Executive while her sister and fellow West Ham fan, Vanessa Gold is the managing director of the 144 retail outlets.

Although the London Legacy Development Corporation, West Ham United and Ann Summers refused to officially confirm or deny today’s news, a senior source close to Ann Summers told Claret and Hugh. “It’s a great deal for all parties, it is the coming together of two great brands and we believe can help West Ham look sexy!”

UPDATE: Now it is past 12 Noon, this was obviously a poor attempt at an April Fools joke!