Posted by Sean Whetstone on October 29, 2014 in Whispers 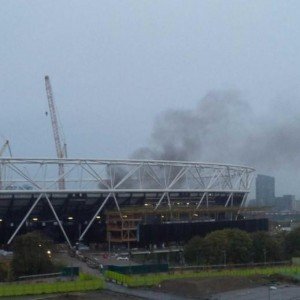 A fire at the Olympic stadium sent smoke over the Queen Elizabeth park early on Wednesday morning. London Fire crews were called after a van inside the stadium caught alight

“We were called at 7.03am to reports of a van on fire in the stadium. Security called us and there were no injuries.There was a fire in a van” a Fire Brigade  spokeswoman confirmed. One London Fire Engine was dispatched and able to tackle the blaze without further assistance.

Although the Stadium was fully evacuated the fire is not thought to have caused any damage or further delays to the rebuild project which has been dogged in recent months with problems with steel strengthening and increased costs over complications with the roof.

Pictures of smoke from the stadium were also quick to circulate on social media this morning prompting fears of a more serious blaze inside the stadium.

← Irons cool on Townsend link
Gold: “All Sakho wants to do is play!” →
Click Here for Comments >