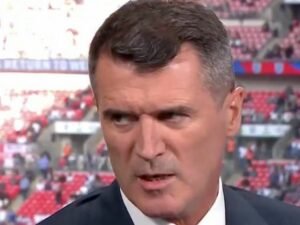 It’s one of football’s most predictable givens that wherever controversy exists Roy Keane will almost be inevitably be found in the middle of it.

So it was never going to be long before he weighed into the debate about whether players should take pay cuts or deferrals.

He takes the view that, despite himself being a FORMER player, nobody should tell them what to do or not to do with their wages forgetting that it’s not his business either!

He’s a strange individual who no doubt has those who like and admire him but at such a sensitive time and on such an important issue this is something that should surely be left to the players individually.

Frankly neither his, mine or anybody else’s view, is irrelevant and thus he should surely – as, if nothing else, an intelligent bloke – keep his thoughts to himself.

He’s a regular on various TV shows and told Sky Sports’ Football Show: I’m not sure how I would have dealt with it,’  A lot of players are getting criticised, the way I would look at it now, I wouldn’t take a pay cut from anybody if I was at one of the bigger clubs.

‘It’s nobody’s business what you do with your wages. No one should believe anything they’re reading on wages. I don’t think players should feel under pressure from clubs. They’ve signed a contract. “

3 comments on “Players wages – now the inevitable voice is heard”