Poll: Hammer of the year 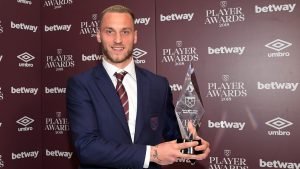 Whether the West Ham annual players’ awards will be held also remains in doubt as it stands but that should not stop the Hammer of the year being selected as it has every year since the 1950s.

In today’s Claret and Hugh poll we ask for your West Ham player of the year with Marko Arnautovic picking the award up last season.